首页 > I Worked on the Abraham Accords. It's Time to Free the Palestinians from Hamas—and Iran | Opinion

newsweek,I Worked on the Abraham Accords. It's Time to Free the Palestinians from Hamas—and Iran | Opinion

Last August, we entered a new era: A 70-year stalemate was exchanged for an era of greater coexistence. The signing of the Abraham Accords between the United Arab Emirates and Israel that I helped broker was a bold, courageous move which promised to finally make progress where everything else had failed.

After the recent conflict with Gaza, though, many thought the Abraham Accords was dead. Where was the promised peace, with rockets flying?

To these skeptics, I would say, look at the bigger picture. The Abraham Accords are not about an Emirati and Israeli future but the whole region's future. The truth is, the Middle East conflict isn't between the Israelis and Palestinians but between Israel and Iran. Ask yourself who benefits from this conflict? The Palestinian people's rights and hopes have been hijacked by Hamas to serve an Iranian agenda.

And it is against Iran's extremism that we must continue to fight.

When the UAE leadership decided to move forward with the Abraham Accords, it was done with a strategic vision not only for the UAE but for the whole region. Skeptics thought the agreement was tied to the Trump administration, as if it might just fade away with the new administration. But there is no going back. We move forward with full speed and have already seen the added value of having such initiatives, not only for the UAE and Israel but for the whole region.

Since the announcement of the Abraham Accords, we have seen that we can build bridges of trust and respect. We in the UAE had laid the foundations; we had already changed the education system and the narrative of the religious figures, readying our people for the path to peace.

But it's not just about us. The people of the region are craving change, not least among them the Palestinian people, who are desperate for fresh leaders, leaders who can move beyond a rigid regime with an agenda that abuses the very people it rules.

For this to happen, we also have to fight the war of propaganda—one that the Israelis lost in this last round of fighting between Israel and Hamas. I saw narratives coming from not only the Middle East but the West too, which represented a shift. One of the biggest errors in this narrative, which I saw repeated over and over in the media, was the way they speak about Gaza as if it's occupied by the Israelis. It's not: It's occupied by Hamas. And the Palestinian people in Gaza are suffering because of Hamas, not the Israelis. 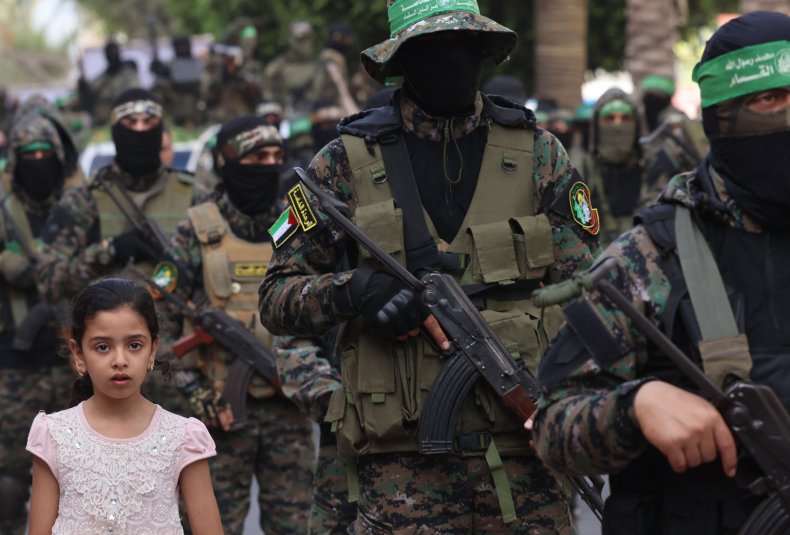 Members of Al-Qassam Brigades, the armed wing of the Palestinian Hamas movement, march in Gaza City on May 22, 2021, in commemoration of senior Hamas commander Bassem Issa who was killed along with other militants in Israeli airstrikes last week. EMMANUEL DUNAND/AFP via Getty Images

Unfortunately, though the propaganda of Hamas and Iran is not true, to the world, it is now dominant.

Still, there is reason for hope. Twenty years ago, the Palestinian cause was priority number one in the region. Now, people in the Gulf see things differently. We still care. We still support support the Palestinians. We believe in the two-state solution. But people in the Gulf no longer believe that this should come at the expense of our national interest. Many activists responded to Hamas- and Jihad- influenced media and social media posts to say, we do care about the Palestinians—but we don't care about these terrorist organizations.

What the public doesn't understand is who is behind so much of the media they read—who is funding this misguided narrative, which only serves to protect Hamas, and ultimately, Iran.

This past conflict with Gaza should be the last war. We should all learn to speak one language: the language of peace. Now is the time to not just talk the talk, but for us all to walk the walk.

Hamas and the Palestinian leadership have hijacked the minds of 2 million Palestinians to sell their political and terrorist agendas. We want the Palestinian people to enjoy what we enjoy, to have what we have and create a better future for a new generation. But we have to do this together, with all the stakeholders in the region, from NGOs to schools, religious leaders and governments. We cannot do this alone.

Dr. Ali al Nuaimi is chairman of the Defense Affairs, Interior and Foreign Relations Committee of the UAE's Federal National Council, a representative legislature whose 40 members, half elected indirectly and half appointed, serve in an advisory role to the emirates' leadership.

The views in this article are the writer's own.