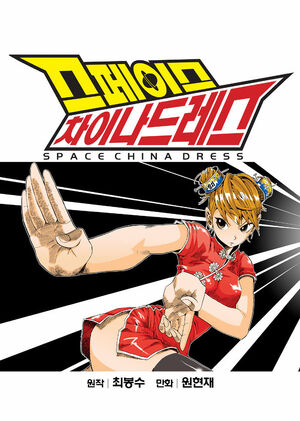 Space China Dress is a webtoon, manhwa with the story by Choi Bong-Su and art by Won Hyun-Jae.

Shaolin Space, a place that's said to be where all martial arts in the universe originated from. And within this planet... a most sacred place among martial artists, Mt. Kunlun. And on top of that Mt. Kunlun, there's Kunlun Headquarters. And if you go down... a long way, inside a small run-down dumpling restaurant, our heroine, Mei, lives. She lives a life of working in that run down restaurant but her life changes one day when she kicks the star student of the Kunlun in the face for trying to bail out on paying for his meal. The Kunlun masters shocked that Mei, an untrained fighter, managed to lay a hand on their star pupil, or rather a foot, scheme to enter her in a martial arts contest so that the star pupil can beat her in fair contest and save face. Will this go as planned or will it back fire?

The animated of this work was decided, and an animation demo was completed on July 9, 2015 (Korean). However, theanimated version was canceled.